CAMP FOSTER, Okinawa – A master-at-arms on Okinawa – “a tenacious and faithful” volunteer at the camp USO – has been recognized with the President’s Volunteer Service Award.

“I volunteer to give back to fellow service members and to make friends outside of work, and it gives me something meaningful to do when I am not working,” Stroup told Stars and Stripes at the USO on Wednesday.

The President’s Council on Service and Civic Participation, created by President George W. Bush in 2003, established the award to honor volunteers who give hundreds of hours a year helping others, according to the council website.

It has three categories: 100 hours for bronze, 250 hours for silver and 500 hours for gold. A lifetime award recognizes volunteers who give 4,000 hours or more. USO volunteers track their hours on an app then submit them to USO leadership to be considered for the PVSA. 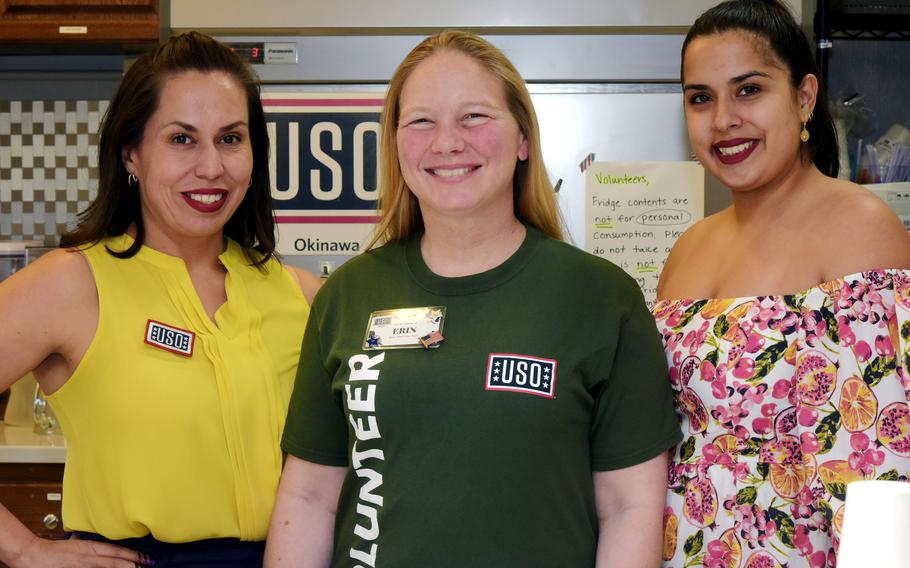 Stroup, who stands security watch at White Beach Naval Facility, received the bronze award memorandum and certificate signed by President Joe Biden on March 31, the day a Camp Foster USO post on Facebook described her as “one of our most tenacious and faithful volunteers.”

“We are always in need of volunteers,” said USO volunteer supervisor Melissa Olivares, a Marine spouse from Texas, on Wednesday. “The USO asks for two hours a month from each volunteer. We need at least five volunteers a day to keep the USO open.”

“We cook lunch twice a week then advertise each meal on the Camp Foster USO Facebook page,” said USO center operations manager Mardie Velasquez, an Air Force spouse from El Paso, Texas. “We recorded more than 4,200 active-duty service members in March. If you look at our food events alone, we see about 2,500 to 3,000 a month just on our meal events.”

Most of the USO’s patrons are Marines between ages 18 and 21, Stroup said.

“I think it’s harder for them to get off base because some Marines do not have driving privileges and many live on base,” she said.

When Stroup is not standing watch or volunteering, she is an active scuba diver with 200 dives around Okinawa and 50 elsewhere worldwide. Her 20-year career has taken her to 53 countries, and she says if COVID-19 travel restrictions lift in Japan, she’ll spend less time in the water and more time traveling to new places.